Biomimicry, a path to sustainable innovation for the energy and environment sectors

Ultra-resistant or super-adhesive materials, survival at great depths or adaptation to amphibious life, with 3.6 billion years of R&D, the world of nature has proven that its ability to develop cutting-edge technologies. These feats, which are by their very essence respectful of their environment, have always been a source of inspiration for manufacturers. That innovative ‘inspired’ approach, which uses nature as a model for design, is called biomimicry. Alcimed, a consulting company specializing in innovation and the development of new markets, sheds light upon the applications of biomimicry in the energy and environment sectors and proposes three axes of tomorrow’s bio-inspired innovation.

Biomimicry is not a new concept: it has existed for as long as man has been observing and seeking to understand the surrounding world. From Leonardo da Vinci’s observations of birds in order to imagine a flying machine in the 15th century, up to Velcro that was modeled after the hooks of the burdock fruit, the achievements resulting from these observations are omnipresent in our daily lives. 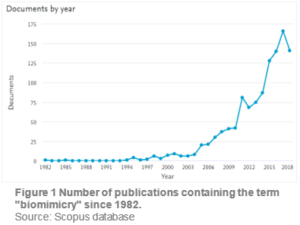 However, the approach to bio-inspired innovation was first formalized in 1997 by the American Janine Benyus in a seminal book, Biomimicry: Innovation Inspired by Nature. Since its release, there has been a growing interest in the topic, demonstrated by an increase in the number of publications citing biomimicry (Figure 1). The potential applications are infinite and can be found in all sectors: from agriculture to aeronautics and energy. However, this approach requires, by definition, strong multidisciplinary interactions between design, engineering, chemistry, information technology, biology, etc. and thus needs actors that facilitate the exchange between these fields. Its development is also currently hampered by a lack of methodological support directly adapted to research done by manufacturers.

In the energy and environment sectors, two areas of inspiration have mainly been exploited so far: morphology and the chemistry of life …

First source of inspiration: the shapes and structures observed in living beings (the honeycomb structure, micropores, etc.). They are reproduced by engineers to improve the performance of an object or structure. In this context, EEL Energy has developed a hydro turbine inspired by the body waves of eels that optimizes energy conversion even in areas with very low currents. In another example, Cambridge University is drawing inspiration from the down at the tips of owl feathers to reduce the noise of air friction on wind turbine blades.

Secondly, engineers were inspired by the chemical properties of materials and by natural biochemical processes. Living beings have succeeded in developing processes to produce molecules with a wide variety of functions under almost ambient temperature and pressure conditions and from only 3 families of polymers. This level of inspiration is already being used in many industrial applications, such as Saint-Gobain’s development of a hyper-hydrophobic and self-cleaning surface inspired by the nanostructure of lotus leaves, or Suez’s exploration of termite digestion metabolism to improve the biomethanization of green waste.

…but a third approach currently under development. 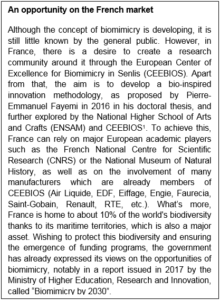 Beyond an almost direct transposition of phenomena observed in living organisms, either by reproducing their structure or by exploiting their metabolism, a third approach now seeks to reproduce the organizational strategies and functioning of living systems.

At the microscopic, macroscopic or ecosystem level, the organization of living systems has enabled them to adapt to the constraints of their environment by developing energy-efficient and resilient systems: a bacterial colony does not import its energy resources but rather is part of an ecosystem created to maximize the use of local resources and limit losses. In the energy and environment sectors, interest in this inspiring approach is intensifying to meet today’s challenge of the energy transition. For example, Renault is looking to rethink the carbon-free vehicle, inspired by the metabolism of marathon runners. RTE uses mycelial networks, which share the produced sugars between trees exposed to light and smaller trees, to balance the energy flows in the electricity grid between regions. Other studies use ants as an example to design algorithms for the optimization of waste collection routing.

The possibilities for inspiration are endless! Alcimed’s Energy, Environment and Mobility team took up the challenge and proposed three other axes for this biologically inspired innovation:

–   What if energy companies were inspired by mammalian hibernation strategies for energy storage and energy consumption management in relation to production?
–   What if the developers of autonomous driving systems were inspired by self-organization and traffic management within mammalian groups, insect colonies or schools of fish?
–   Finally, what if local authorities and public service actors were to draw inspiration from the symbioses observed in living organisms to organize energy-efficient industrial parks, such that one actor’s waste becomes another’s raw material, that the residual heat from one’s effluents is used by a neighbor, that the CO2 emitted by one is captured and used by another, etc.

All these are further reasons to protect biodiversity, which still has a lot to teach us!